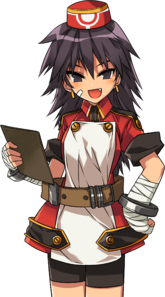 "Listen to Camilla: it's a good day for sparring!"

Camilla is the NPC that handles many features involving PvP.

The charming but feisty Camilla is a weapon enthusiast, and perhaps the ideal person to lecture wannabe heroes who want to acquire additional survival skills. Apply or die!

"I am selling items that can make you stronger! You can buy them with your hard earned AP!"

"Would you like to craft something? I will help you!"

"Hey, I want to ask you something. Hehe."
Camilla provides the first four Skill Quests to unlock the skills in your skill tree. She also has daily and weekly quests that reward you with Competitor's Coins, Duelist's Coins, and/or Jellmantis Fragments for playing PvP, or Warrior's Victory Medals for playing Ereda's Island. Duelists Coins can be exchanged for Sparring Specialize Stones, while Competitor's Coins can be exchanged for Basic or Intermediate Warrior's Potions, Stamina Potions, Secret Dungeon Entry Permits, Heroic Invitations, Elrianode Defense Requests, or a cube containing a temporary Magic Necklace or Skill Ring/Ring of Fury. Warrior's Victory Medals are used to craft and upgrade the Warrior's Accessories, but can also be exchanged for a random amount of El Tree Seeds, Complete Recovery Potions, Mana Elixers, Vigor Potions, or Stamina Potions.

"Do you have this stuff?"