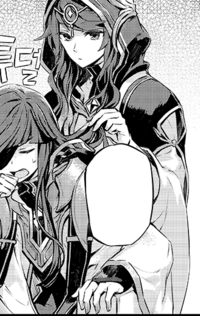 With the El Masters seeking out a method to circumvent the sole need of the El Lady, they proposed the inclusion of an El Priestess system. Individuals they'd train in the art of maintaining the El as oppose to the Masters who's purpose was primarily to protect it. Fanelia was chosen to take on the role of the first Fire Priestess to be trained under Rosso. Due to Rosso's hot headed demeanor, Fanelia developed an innate ability to completely ignore Rosso unless it was something important which would typically result in Rosso burning out of his arguments. Despite this, she still maintained a fair deal of respect and affection toward her mentor.

When the El Exploded, the land was left in a state of utter chaos. In a desperate attempt to salvage the scattered El, the El Masters went their separate ways and poured their energy into various large El fragments all over the world. Fanelia was especially saddened by this reality and begged Rosso to not go forth, however the Fire Master cold-heatedly dismissed her pleas and poured his energy into the El and leaving the training for the next Fire Priestess to her. After Rosso disappeared from Elrios, Fanelia remained in the land which would become Lanox where she would maintain the Fire El and train her successor.