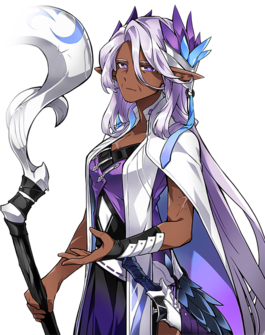 The elder of the Dark Elves dwelling in the Varnimyr regions. She is an old but extremely powerful elf with tremendous power and knowledge.

In the midst of the El Search Party's battle with Sentinel Commander, as Rena fired a shot, Edith intervened and caused Rena's arrow to vanish. Stepping down, Edith calls of Sentinel Commander, telling her to stay back but be prepared if she requires assistance. Edith apologizes to Chloe, realizing that the Dark Elf Village does have a strict policy against outsiders. Edith asks Chloe is she would translate for her, Chloe tells her that Rena was an Elrios Elf that knows Ancient Elven, and that she'd better talk to her instead. Edith surprised to see an Elf from Elrios greets Rena in the Ancient Elven tongue.

Edith introduces herself and asks Rena why she would try to communicate with the Dark Elves in Ancient Elven. Rena responded that she had learned from her elder that the Elves and Elrios and the Dark Elves were originally one and the same. Edith curious if she considers the Dark Elves the "Cursed Elves". Soon apologizing for asking such an uncalled for question, she tells Chloe to brief the rest about what they were talking about. Chloe then running through the history of the Dark Elves and how they tapped into demonic energy while living in the Obsidian Forest, other Elves calling them the "Cursed Ones". Eventually they somehow ended up in the Demon Realm, resulting in the Dark Elves today. Elesis asks Chloe if the Demon Realm was the Dark Continent, originally not answer to Edith's dismay, Chloe then revealed that the Dark Continent is indeed in the Demon Realm and that they're in the Varnimyr region. Chloe then goes to warn Edith that the Dark Elf Village is in danger, that the Demon Armies might come to attack the village since Chloe had abandoned her post therefore breaching her contract to keep the village safe.

In the wake of the news Chloe had brought them, she commanded the dark elves to prepare to the imminent war against the other demon realm forces. Some time after the El Search Party's departure from the forest, dark elves had taken in Ventus and Lincy. She spoke with Ventus, with Lincy as the translator between the two, she told him about the El Search Party and that they had gone to the Spirit Asylum to investigate the loss of communication from the asylum.