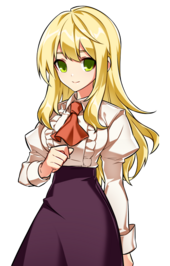 Raven's deceased fiancee, along with the Crow Mercenaries stormed the Velder prison in hopes of freeing Raven. However they were hunted down and Seris was killed by Owen in front of Raven. She met Raven while they both attended a prestigious military academy and was his teammate during the academy's Mock Siege Warfare.

Seris attended Velder's most prestigious military academy much like Owen and Raven. When Raven and Owen agreed to form a team for the academy's Mock Siege Warfare, Seris popped up and offered herself to be their third member. Owen was skeptical of her abilities, but she was quick to persist. Owen continued to deny but Raven eventually agreed to allow her to join their team. She was ecstatic and brightly promised that she would do her best.

During the actual competition, Owen and Seris hid in the brush while Raven was to hid at the castle's blind spot. Following Owen's plan, Raven found an opportunity and attacked the group while they were off guard. While Raven distracted the boys, Owen and Seris charged the castle. Sneaking by the opposition, Owen and Seris were able to claim the enemy's base, winning the battle. Seris overjoyed and hugged Owen to his discomfort. When the two got to Raven, they helped him up, and Seris said that they should rush him over to the infirmary. Overhearing Zohan, Fred, and Barton scorned them even though they had lost, Seris burst over at them. However because they needed to take Raven to the infirmary, the argument was cut short.

After the event of the Mock Siege Warfare, Owen assigned the two daily exercise routines. These workouts were intense to the point Seris was about to collapse. She complained to Owen that his training was too strict. Despite her complaints she did complete all the workouts that Owen had assigned. Raven asked her why she joined the military academy, she replied that she wanted to create her own life and not be a mere pawn of her family's name and be married to someone that her family had arranged. Owen interrupted with the inquirement for his new specialized training. Seris complained to Owen that he was being too harsh, again.

On one of the group's day off, Seris and Raven were hanging out when they saw Owen heading towards the library. The two followed Owen to see what he was doing, they learned that he had been studying up to broaden his view to allow him to create more tactics. Seris awed in amazement that he was able to read so much, as well as expressing her dislike of reading. Owen begun to express his gratitude towards the two when Seris cut him off and thanked him for caring for them all this time, however Owen expressed his gratitude for them was based on their usefulness to him. Seris took the harsh words and asked Raven how he felt. Raven expressed that he felt the same - to Seris's shocked surprise - however Raven soon corrected himself, backtracking to what Seris had felt. Seris expressed how she was so moved jokingly. Later the school year they once again found each other in the library, Seris hoped to surprise Owen and breaking him out of his constant monotone stoicism. She sneaked up on him, to her disappointment, Owen was completely unfazed by her surprise. She gazed at Raven with a childish smile.

After the time they spent in the academy. Raven and Seris would begin to date each other and form a relationship which would last the years to follow.

Death of the Crow Mercenaries

After Raven had been framed and sentenced to death by Owen. Seris and Raven's fellow comrades of the Crow Mercenaries came to free him out of prison, before he was to be executed. They were successful however, Owen, alongside other Velder soldiers hunted them down. One by one, the Crow Mercenaries fell and Seris was killed by Owen in the massacre.