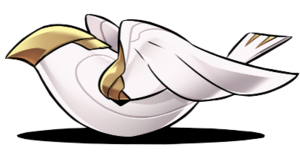 One of Theodore's Nasod Birds.

Nasod Birds were scatted all throughout Elysion, even in the Celestial Crossroads. The birds helped Theodore survey vast amounts of Elysion and even become aware of the El Search Party's presence long before they even made it into the city.

Nasod Birds were stationed all throughout the city of Elysion. Theodore had simply asks the adventurers to aid him and recovering the various birds around the city. In exchange he gifted them a Nasod Bird of their own.

Theodore had been sending out Nasod Birds all throughout Elysion and many made their way to the city's underside where they encounter Solace's Fortress. Unfortunately, due to the extremely potent El energy and devices which siphon energy out of the surrounding machines, many Nasod Birds which came close to the area ceased to function almost immediately.