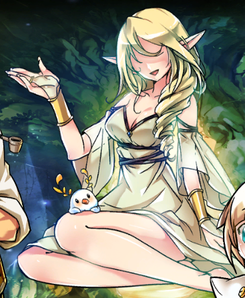 An elf who lives in a dense forest surrounding Ruben. When Adams stumbled upon the elf domain, he befriended Layla and they bonded over their connection with nature on the world around them. When it came time for Adams to leave, she escorted him out of the forest and they haven't seen since.

Layla lived deep inside dense forest in a commune of Elves. One day, Adams arrived in the village while lost inside the dense forest. There, Layla became friends with Adams, she told him all about the forest, creatures, and all about Elrios. The two continued on and one talking about their experiences and became close friends. While Adams considered staying in the village longer, he decided that he must return sooner or later. Layla guided Adams to the edge of the forest where the two parted ways.