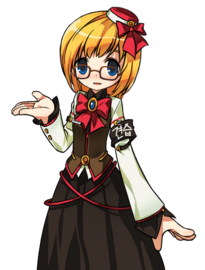 Luriel is an NPC that can be found at any town except Ruben Village. Her role in the village is to provide players access to the Bank.

Luriel is our most trustworthy citizen. Entrust her with your gear and gold at Cobo Bank Service. You can deposit and withdraw your items through her anytime.

While helping Ariel with preparing for Adams's welcome party, she had stepped out for a moment. Luriel stepping in to help out with the food. She got a cook book and started cooking. She following the recipe but also added some other foods into the recipe thinking that good food mixed with other good food would only make it better. While putting away the ingredients after finishing cooking, she accidentally dropped the flour and caused a mess in the kitchen. Ariel and the adventurers came down to check on Luriel. Luriel showed them the food she had made, Ariel and everybody was surprised to see the food looking perfect. Ariel, Aisha, and Elsword decided to taste the food. Their faces soon filled with disgust and the struggled and pleaded to Luriel. Luriel got the group some water to wash down the food and wondered what had gone wrong. Ariel asks her sister what recipe she had following, Luriel told her that she followed a recipe she had in her read, mixing the cook book recipe with other delicious food. Ariel asks if Luriel even tasted the food, she said that she wanted her sister to be the first to taste it.

While delivering documents for COBO H.Q., she had accidentally lost them and they were scattered all across Hamel. She pleaded the adventures to help her recover the lost documents. When they returned, they were greeted with Luriel having lost even more documents in Velder. After collecting all the documents she sent them as she was supposed to. Ariel decides to scold Luriel on her mistakes and tells her the consequences for her actions when she becomes a full-time employee. Luriel promises that she would do better next time. After Ariel tells the El Search Party about COBO and their president, Luriel asks if she could get Ariel to ask the president something. Luriel whispers it to Ariel, but Ariel quickly shuts the idea down.

When Ariel took Adams to his party, Luriel greeted the man of the hour alongside the other COBO employees. Luriel thanks her sister for making sure everything didn't even up as a disaster. When Ariel started ranting about working for COBO, Luriel and Myu both jumped in. Luriel complained about how they have to move around Elrios all the time and the company doesn't even bother to pay for their travel fees. She also complains that they have to face the big and scary president whenever they make a mistake. When Adams decided to flee the party, all the COBO employees rushed to try and catch Adams so they wouldn't have to take on his workload.