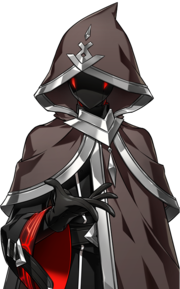 A mysterious hooded figure and seemingly a high ranked official in Henir's Order. He is dressed in a cloak with distinct red patterns.

Some time after a previously failed attempt to recruit Clamor Ventus into Henir's Order, the Red Member approached the Seven Tower scholar again but this time with a job proposition to help build an artificial spirit device to aid in issues regarding the Senace waterways. Clamor took the offer and began to work construct the incubator project as per the client's request. Undenounced to Clamor, the actual purpose of the device the member requested was to be used on living things to transfer or imbue energy into them.

On the final due day of the project, the Red Member met Clamor in his study. He was quite pleased with Clamor's results and was prepared to bid the scholar farewell. Clamor at this point realizing the harmful potential of the machine he helped to creation tried to inject himself into the project under the excuse of last minute maintenance, however, another member of Henir's Order quickly knocked Clamor out. Henir's Order took Clamor away while the Red Member cleansed the scene of any evidence of their presence.

After Hennon's failure in Elrianode, the Red Member began to take action to further the goals of Henir's Order. Soon, Gates of Time began to appear sporadically throughout Elrios.

In one such fissure, the gate led to the remnants of Fahrmann's Peak which had now been consumed by Henir, now existing in the Twisted Time and Space. Glave was surprised by the appearance of the Gate of Times not in his control. Intrigued he sent the El Search Party to investigate it. There they fought the corrupted Drabaki. As the battle commenced, the Red Member observed the El Search Party from afar, making sure his presence was not detected.

Upon Drabaki's defeat, the Red Member walked to the remains and picks up a Seed of Life left behind by the defeated Drabaki. Impressed by the El Search Party's ability to defeat Drabaki, he shows intrigue for the group which defeated Hennon. The man decides to continue observing the El Search Party from afar.