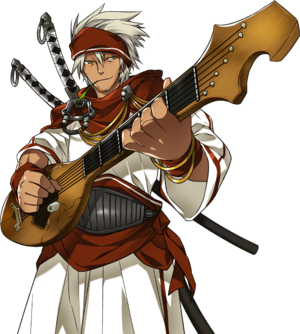 A Wandering Bard named Noel happened to settle in Velder. He now calls himself a bard, but he used to serve as mercenary, armed with double blades. He lost many comrades, even more than the enemies he slayed. When his last friend fell, he picked up his lute and started to travel with a skeptical mind. He cannot sing, but he knows how to play the lute.

Noel was once a master tactician for the Velder army. After his long experiences with war, he grew a distaste for it and soon abandoned the battlefield for a life as a bard. The El Search Party went to ask Noel for his aid and tactical intuition to aid in the reclaiming process of Velder. Noel pointed out that the demons are using a unique form of musical communication to perform their battle formations, suggesting the El Search Party to retrieve the music sheet the demon in Residential Area 3. Once they retrieved the music sheets, not only did the demons lose one of their means of communicating but Noel also got a new piece of sheet music to play. Under the guidance of Noel, the Velder soldiers easily advanced through Residential Area 3.

When Vanessa and the rest of the Velder army reached the Palace Entrance, Noel identified the presence of the fire spirits Kenaz. Their fire never burns out so if the El Search Party wish to reclaim Velder, they must defeat the fire spirits. After the El Search Party came back from dealing with the Kenaz, they were covered in ashes. To Noel's concern, Vanessa sent them to get themselves washed off for their safety. Traveling deeper in the Palace Entrance, Vanessa's soldiers were confronted by Mcgard the Blitzkrieg. Noel was interested in just how diverse the demons could be. Confronted with the Glitter Vanguard, they faced what could possibly be the most dangerous weapon the Glitters had. As the main destructive weapon which aided the Glitters in conquering Velder, it was revealed the Glitter Vanguard were rigged with tons of explosives. The Velder soldiers retreated from the Palace Entrance as the area became exceedingly dangerous. The army found their way to Burning Hope Bridge. Under Vanessa's instructions, Noel neutralized the Siege Towers, allowing their forces to progress. Facing Crazy Puppet, Noel suggested to meet with the alchemist Grail.

As Vanessa's confidence as a leader grew, Noel supported her through her decisions. Retrieving the battle plans for the demons, Noel realizes that there was a lack of demons posted by the Southern Gate. As the group made it to their last ditch effort to escape at the Southern Gate, Noel hoped the place was safe and the demons had avoided it due to the large number of traps. Unfortunately, Southern Gate turned out to be a trap and all the demons soldiers and elites were stationed there for a surprise attack. Once the El Search Party had successfully evacuated from Velder, Noel promised to always be ready to return to battle to reclaim Velder.

Noel notices Vanessa in a good mood and wonders if she had received good news. Vanessa tells Noel that the path between Velder and Hamel had be restored. Noel wonders if the El Search Party had anything to do with the improving condition of Hamel. Vanessa agrees and also feels quite thankful for their help in saving them in Velder.