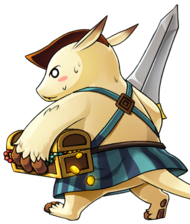 The leader of a mischievous band of thief Phorus in rural Ruben.

Chapter 1: Banthus, the one who is after El

During Banthus' raid of the Tree of El, William began to take after them and decided to get his ragtag group of Phorus to start stealing from the villagers as well. Their actions caused a bit of a ruckus in the Forest Ruins, enough that Hagus suspected that it might be linked to bandit activity. However, once Elsword, Aisha, and Rena finished checking it out, it simply turned out to be William just causing trouble. The group smacked some sense into the Phoru and they made their way to hunt Banthus once more.

Chapter 3: The secret of Wally's Castle

During the Elder uprising, once the El Search Party made their way through the Underground Waterway, they found themselves in the Suburbs of Wally's Castle. However, the group was not alone. William had made his way into the area just outside of Wally's Castle and intended to bring his group of Phorus and steal from the Lord of Elder, Wally. William's presence in the area was very detrimental to the group's plan to raid Wally's Castle and Lenphad demanded they dispose of the rogue Phorus. While Elsword and the group were able to take care of William and prevent him from causing any further trouble, some damage had already been done. The presence of the Phorus caused the security in Wally's Castle to become tighter, making the stealthy route impossible and forcing the uprising to go on the offensive.