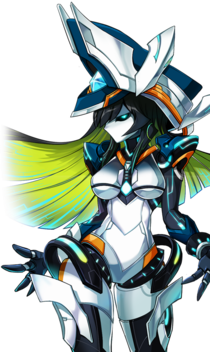 A relentless commander of Atlas.

A female type Nasod that protects the top floor of the Elysion Tower, which connects Atlas to Elysion. Maya is the one in charge of Atlas and she had placed her troops inside the Tower. She is originally from Elysion just like Dekal and seems to be related to Yuno in some way.

Chapter 22: The Elysion Journey to Solace

Guarding the top of Elysion Tower, Maya prevents any unauthorized intruders from taking the transporter up to Elysion. When the El Search Party make their way up the transport tunnel in Elysion Tower they find themselves at the top of the tower. Maya was surprised to see that they were able to get past her army of security Nasods and make their way up to the top of the tower. Yuno was shocked to see Maya guarding the tower and she recognizes Yuno's core as that of the traitor of Elysion, Herjuno. She attacked and defeated Yuno, expressing that he did not deserve to return to Elysion after his betrayal. Yuno tried to tell Maya the truth, but she had no capacity to listen, following her duty as guardian of the tower she prepared to prevent all of them from progressing. The El Search Party were able to defeat Maya, badly damaged and her systems failing, she commends the El Search Party for their combat abilities, but was not about to let them reach Elysion. With the last of her energy she disarmed the transporter device, sending it hurdling down the tower.