For the 3rd Job Class of Laby, see Nisha Labyrinth. 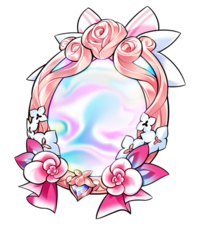 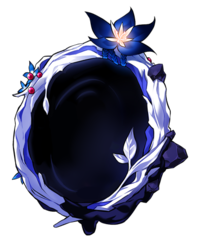 A mirror wielded by Laby, and the manifestation of her sadness and grief.

A long time ago, Laby and Nisha were one and the same being. Due to the grief and trauma experienced by Laby after the death of her friend, her sadness and negative emotions separated themselves from her and manifested as a separate entity, this entity was Nisha. Due to this divison, Nisha not only took away Laby's sadness but also withdrew the traumatic memories, allowing Laby to live a life apart from the thoughts which had previously given her grief.

From that point onward, Nisha would accompany Laby while, Laby was none the wiser of what Nisha was, simply believing her as a friend.

The Girl in the Black Forest

After miraculously being able to escape the Black Forest for the first time, Laby and Nisha encounter Bellonde at a gravesite within the forest. Introducing themselves without a name, with Bellonde's help, the two decide to adopt names after the forest they were in, Nisha Labyrinth. The girl took the name "Laby" while she named her friend "Nisha".

When Laby and Nisha entered the Henir barrier outside of Elrianode, the power of Henir had an effect on Nisha and cause the negative memories within her project to Laby. At first, an illusions of Laby's forgotten friend appeared, but it ran away, Laby gave chase. The distorted memories then took her to North Fluone, her memories of the events distorted, she was presented with a reality where Mao had died from Nenya's attack. Laby began confused and ran. Nisha tried to project fond memories but they all distorted, filled with sadness and despair. Laby ran, ran till the ends of the earth, she ran all the way back to the Black Forest, there, the memories Nisha had kept hidden surface.

Confronting the root of her sorrows, Laby for the first time, understood who Nisha was, her sadness.

While Laby now knew what Nisha was to her, her meeting with Denif and the others in Elrianode left the two wonder what they were as a whole. Even more, Laby had begun to question what they should be going forward. Despite once being the same being at some point, Laby and Nisha begin to show reluctance in wishing to return to being one and the same. Ventus overhears their conversation and provides them with his own advice, noting his bond with Lincy. The Wind Master points them toward the Elriabrunnr where they might find their answer.

Laby and Nisha go to the Elriabrunnr where voices call out. Laby initially mistakes it for the voice in the forest, but Nisha notes it as different. The voices call out and Laby realizes she'd been hesitating, not wanting to become one with Nisha and not wanting to lose her as well. In the end, Laby and Nisha make a decision, they won't combine, but they choose to understand one another and walk the path together.