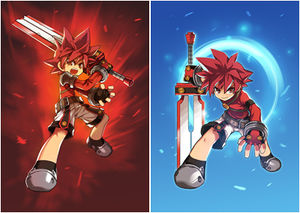 Way of the Sword promotional artwork.

Character Systems are gameplay mechanic which are tied to each individual character and makes each of their gameplay styles unique from one another. These systems take on many forms which affect how characters perform skills, awaken, and just generally otherwise play.

Certain systems follow the use of some type of secondary resource used as either a secondary pool, supplement, or enhancement in place or in tandem with MP.

Examples of this can take shape in systems such as Rena's Nature's Force which acts as a secondary resource that has no bearing on her ability to use her attacks or skills, but will provide passive benefits when in possession of the resource and will be consumed upon certain attacks of skills to provide addition offensive benefits.

Lastly, there are certain secondary resources which can act to supplement or are completely separate from MP. Rose's ECP System is integral to her use of Active skills, which use ECP instead of MP entirely. 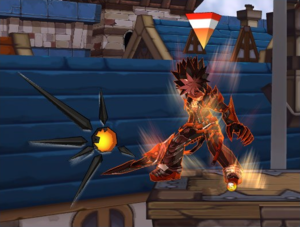 Some systems will be tied to the character's ability to enter Awakening Mode or some otherwise similar state. Systems which revolve around this tend to provide some sort of additional benefit on top of the default enhancements, some being tied to a characters' secondary resource while others are the primary draw of the system entirely.

An example of a system which primarily revolves around Awakening, Raven's Anger of Raven is completely dependent on it, providing him with a Nasod Core while Awakening Mode is activated. While the core is present, skills will cause the core to strike opponents, dealing additional damage. The core will also protect incoming attacks and provide resources when it disappears. An enhanced version of the Nasod Core will be provided if Raven consumes 3 Awakening Beads.

An example of an awakening system more closely tied to another aspect of a character's system is Ara's Power of Eun. Upon entering her 3 Bead Awakening Mode, Ara will transform into her Celestial Fox state. While in this state, her ability to recover her secondary resource, Spirit Energy, is greatly enhanced as well as she herself gaining some addition stat benefits.

A select few systems act completely differently, neither tied to some secondary resource or the Awakening System entirely. Sometimes tied to the Character System Key which is by default on the V key.

Aisha's Memorize is entirely built on the use of the additional key, having players store up to three skills to be used in at a later point via the Character System Key.

Eve's alternative system Code: Recovery allows her to convert a portion of her MP into HP with additional effects based on job progression.