El Resonance is a feature that enables characters at max level to further enhance their abilities and all other characters linked to the same account. 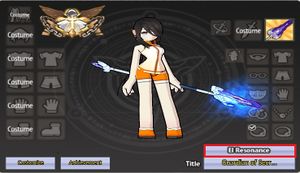 Despite the "Various Power of El Resonance" quests stating "Post-Elrianode", Elrianode dungeons can also be used to complete them.

After the El Resonance Book is used, the EXP bar in the user interface will become cyan-colored. It will now display the progress towards the next El Resonance Level when viewed with a character at level 99.