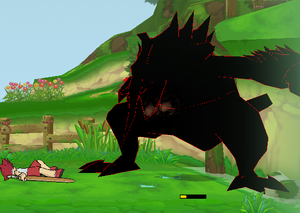 What is a Stoic Threshold?

When a monster reached their Stoic Threshold, they will obtain Super Armor for a brief amount of time and their appearance will temporarily change to pitch black with a red outline. Any target within close proximity will be pushed back and knocked down, similar to the effect of Iron Body - Strong. This will be considered an attack, meaning it can trigger certain skills / Character-exclusive systems and is affected by evasion. It will also contribute to your hit counter at the dungeon results screen, which means you must take this feature into account when performing speed runs for certain titles.