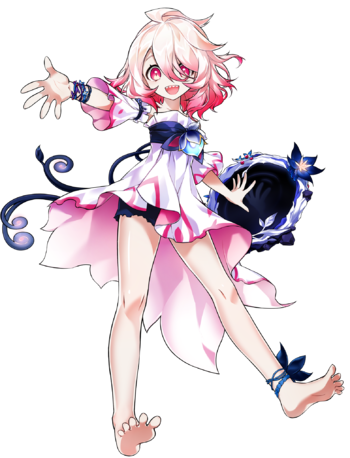 Laby also automatically enters awakening when her awakening gauge is full, so she can use her single awakening bead to instead perform a special awakening skill that damages enemies around her and puts them into a Groggy state, while recovering her Sentimental Points as well.

Every new thing is exciting and interesting to Laby. She may seem eccentric with how she expresses her feelings, but she is always eager to learn new things.

She lived deep within Black Forest for an unspecified time, but she was finally able to leave, led by 'Third Blue Light.' She decides to leave the forest and go on a journey to learn who she is.

The mirror that follows her around is her trusted ally and confidant. It helps Laby out as if it has its own conscience. Adept at using her fists, Laby will occasionally use her mirror in combat.

Laby is required to be Lv.15 to begin her first class advancement.

At level 15, Laby can decide between advancing as a Sparky Child, Twinkle Child, Rusty Child, or Rough Child.

A job path that combines power with Nisha.
Use versatile skills that change forms to attack effectively.

A class that utilize the correct summon depending on the situation for strategic play.

A class that has fun pranking with Nisha and allows you to play more tricks the more you collect Black Aura.